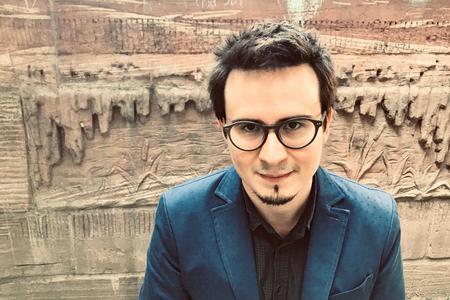 Martín Rincón Botero was born in 1987 in Cali, Columbia. In 2006 he began studying composition at the Xaverian University in Bogotá. He studied composition among others with Diego Vega, Juan Antonio Cuéllar, Carlos Julio Ramírez Toro and Guillermo Gaviria. He also received, as part of a project sponsored by the Fundación Batuta, private lessons with Don Freund.

To Germany he came in 2013 to study at the Lübeck University of Music (Musikhochschule), where he finished in 2016 his Master studies in composition with Prof. Dieter Mack, and took conducting lessons with Frank Hube. Composition masterclasses with Sidney Corbett, Samuel Adler, Sandeep Bhagwati, Rodney Sharman, Arnulf Herrmann, Reiko Fueting and Hèctor Parra.

In 2015 he won the Théodore Gouvy composition prize and with it a commission for a composition ("Dreu") for the German Radio Philharmonic Saarbrücken. His music has been performed on different occasions in Germany, Austria, Columbia, Poland and the Netherlands, for example in the Klangspuren IEMA (Graz) and Mouvements (Saarbrücken) by ensembles and orchestras such as Boreas Quartett Bremen, Ensemble Volans, Trompo, Gdańskie Trio Stroikowe, the German Radio Philharmonic Saarbrücken and the Symphonic Orchestra of the Lübeck University of Music.

Lecturer (summer semester 2017) for work analysis (introduction to the pitch class set theory) at the Musikhochschule Lübeck and regular lecturer at the symposia of the International Anders Eliasson Society in Vienna and Stockholm with contributions to the analysis of works by Anders Eliasson.

Studies in contemporary repertoire conducting at the Lugano Conservatory in Switzerland with Arturo Tamayo. For the season 2020, conductor of the LandesJugendEnsemble für Neue Musik Schleswig-Holstein.